Apart from the all-ages classics that we’ve all played one too many times, there are a plethora of less-known but equally fun if not mindlessly debaucherously entertaining board games out there, designed exclusively with the not exactly young ones in mind.

The word adult could equate to mischief, but that isn’t always necessarily the case – although agreed that the games tend to involve some form of scything humor and a rash degree of vulgarity. How else would it be fun?

Whether straight up vulgarity, intellectual stimulation, or heated gender inequality battles, whatever rocks your boat, getting time in with your favorite crew is ten times better with a barrel of booze and a barrel of laughs – and one of these hot titles in tow. 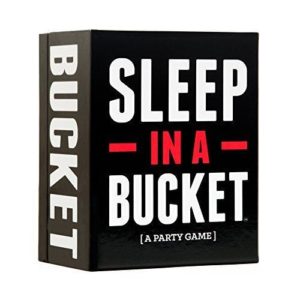 Sleep in a Bucket

With a name that gives you a clear idea of where this game is going, Sleep in a Bucket respects the rules of democracy while making you collectively cringe with embarrassment amongst your fave group of friends.

In a game that respects the norms of democracy and debauchery in equal measure, one person from your clique is designated as the presiding judge, with the rest of the players serving as an acting jury. Before initiating gameplay, each player is then dealt a stack of 5 cards, with each card inciting an awkward scenario to be carried out by the judge.

Each player then places the card facedown after selecting a scenario they feel said judge is least comfortable with in carrying out. The floor is then given to each player to make his case of trying to convince the judge as to why his or her card is the worst pick from the lot that is on display.

Once all cards are placed, the judge adjourns the session by reading the cards aloud while reserving the right to ask related questions and get a clearer idea of what kind of embarrassment comes with the package. Once the worst card is chosen, this nets whoever would have dealt that card 1 point, and the cycle continues at a similar rhythm until one player gets the better out of 5. The rest is up to your imagination. 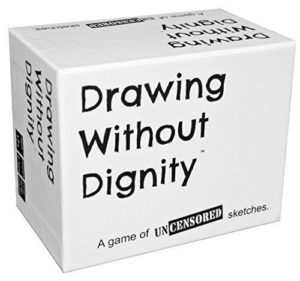 Like Pictionary for adults, this game’s self-explanatory title should most definitely clue you in as to what kind of imaginative mayhem it leads to. From TwoPointOh, it requires talent and wit to cruise through any session and of course, you’ll have to leave your dignity behind and parked at the door. You and your friends’ illustration skills are put to the test while scribbling out not very children friendly subjects that are given to you on a card. The scenarios you’ll be asked to draw up are picturesque to the say the least, and the real challenge is in translating the often nasty, random depictions onto paper within a limited timeframe. These include: nudist, porcelain, blue balls and a pooper-scooper twister, and so many more. You get the idea. Definitely no censorship involved in this one, Drawing without Dignity should be seen as a game that promotes free will and freedom of expression. 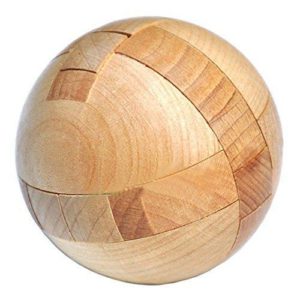 Here’s a game that actually puts your intellect to play and is bound to improve your memory skills tenfold. While at first appearing in a burr-shape, you’re handed a ball that can be molded into many more. This game is reserved for the solitary-spirited and similar to a Rubix cube challenge, will have you peering over and wrangling with it for hours. Said to be infused with the wisdom of the ancients owing to the fact that it has existed since the 18th Century, the little relic from Burr puzzles can be molded to take on many alternate shapes. Disassemble it and put it back together to conceive various other shapes, this is a game you’ll want to get a hold of if you’re aiming to hike up your IQ or stimulate your brainwaves which we’re assuming like everyone on this planet have by this point been sizzled to a crisp by the beams on your smartphone’s display. Give yourself a break. Your problem-solving skills will be boosted with this toy added to your daily drill. And while it might appear to be a one-person game, it definitely requires the wits of an adult to solve so not recommended for the younger ones, but could use the advice of a senior family member. 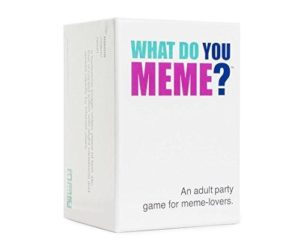 What do you meme? Adult party game

Aimed squarely at the social media gen, and with a title that instantly evokes Justin Beiber sentiments, what do you Meme is a visual game that involves pairing up different cards to create witty memes on the go. The rules are as follows: a rotating judge is pre-selected with the directive to display a photo card, while everyone else in the so-called jury plays a caption-card to result in a meme. The floor is left to the judge then to zone in on which meme pairing is the funniest of the lot, netting whoever would have played that card a point. Whoever ends up with the greatest score would have out-memed everyone else and the fun continues, with a deck of 270 cards which include 255 captions and 45 photo cards to amount to an infinite sample space of meme possibilities that change every time you play. 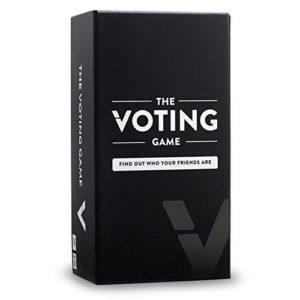 In an era beset by Trumpian campaigns and Brexit votes bringing on results nobody would have ever expected, and with local elections here in Lebanon in mid-swing, the Voting game will speak loudly to the social politician in you, whichever side of the fence you happen to be on. It’s designed in a way to uncover very uncomfortable truths about the bonds you share with the people you are competing against – whether friends or lovers. Seeing as no two friendships are the same, the gameplay and dynamic changes every time you play, depending on who’s involved. Definitely a method of increasing your intimacy levels, like a modern spin on truth or dare, a revealing vote forces one of you to take to the mainstage and divulge personal anecdotes and secrets you normally would prefer to keep to yourself. You’ll definitely have to have the right kind of spirit and an open-mind to enjoy this game to its maximum. 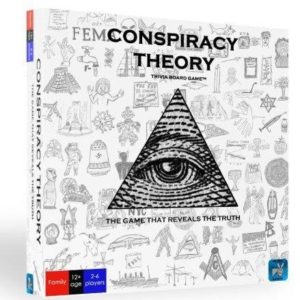 With the illuminati symbol staring you straight in the face, in a game which claims to “reveal the truth” put your stealth and secret police skills to play, as this board game might have you imparting some very delicate intelligence.  Jog your brainwaves while you attempt to dislodge conspiracies that are being weaved before your eyes. In an age of misinformation where the fake news epidemic has people double guessing almost everything they read, conspiracy theories are running wild. All players huddle up together to take turns as the acting justice. Whoever is designated as the judge reads out a conspiracy from the allotted cards, at which point the other players choose from their own stack to answer to the conspiracy by adding even more conspiracy to it. Whoever manages to piece together the wildest conspiracy, be it in terms of credibility or just flat out madness, is then put to the challenge of convincing the acting judge that it’s the actual truth. May the sneakiest man win. 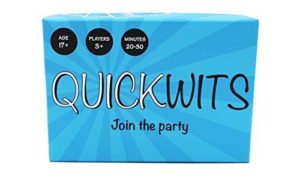 With 150 cards consisting of a different selection of quickwit, mystery, link and battle cards, in this quickthinking title the gameplay involves all of you taking each other on in a symbol matching challenge. When two cards are linked, this brings on confession time by one of the players whose job it is to reveal some very nasty details about themselves. After each player is handed a random selection of cards, they’re then asked to place them on the table. Once two of the player’s cards symbols appear as matching, the challenge is in seeing which one shouts out an example of the category listed on his or her card. The cycle continues and whoever gets the most chips wins.

You’ll be on your tenterhooks in a game which will put your reflexes and quick thinking abilities at full throttle.

We hope this round-up of board games for adults means you’ll be having your kicks with time spent together. Agreed, not all of the games involve lewd content but then some of them do, so we’re not sure if this is suitable for family fun, but definitely, something to do amongst your life partner if not best friend or many.

If any of these titles are catching your eye, there are a ton more available at Beirut Shopping, Lebanon’s number one online retailer.

Everything Else Our Picks Uncategorized